In 2019 it was reported that the sneaker reselling is on it's way to becoming a $6 billion industry by 2025. Despite concerns of a sneaker bubble emerging, the companies helping drive that growth haven't been backing down. Rather, they've been doubling down by expanding globally. In 2019 GOAT Group took a $100 million investment from Foot Locker and expanded into China. 2019 was also a big year for StockX, becoming a unicorn - a startup valued at over $1 billion - and announcing it's own plans to enter China.

While StockX and GOAT are the most well-known sneaker reselling platforms in the US, they aren't the only players in industry. KLEKT, a European sneaker marketplace similar to StockX, announced free worldwide shipping in 2019. Poizon, a marketplace from China, reportedly does 3x the sales of StockX and has shown early signs of expanding outside of China.

It's become clear that there's a concentrated effort by the large players in the industry to expand as quickly as possible and dominate the global reselling market, but one key takeaway from this is that as more global competitors emerge, there will be more fragmentation in the market.

As a response, Plugd has added size and currency conversions to the platform to cater to the global audience of sneakerheads. It's the first step in a series of updates that will make finding the shoe you're looking for at the best price easier than ever, no matter where you or the shoe are in the world. Here's what you'd see if you looking at the OFF-WHITE x Air Jordan 1 Retro High 'Chicago' in France.

Make sure to download the Plugd app, available on Android and iOS or subscribe below to stay updated on the latest features. 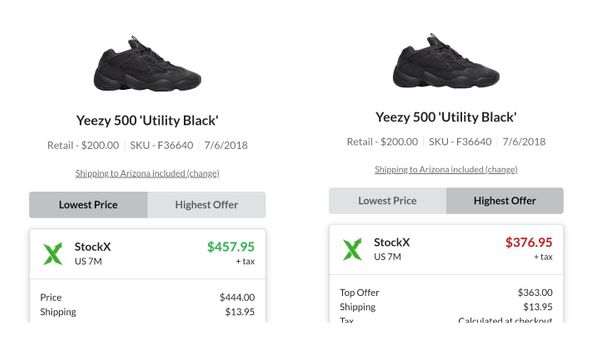 we've recently added a way for buyers on Plugd to see the highest offer and lowest prices on the checkout screen to help buyers make more informed purchasing decisions. We've color-coded prices throughout the app to help users identify the different price types.

Earlier this year, Stockx and GOAT started charging sales tax in a growing number of states. The price difference with the addition of taxes can be significant, but the good news is that there's an alternative.